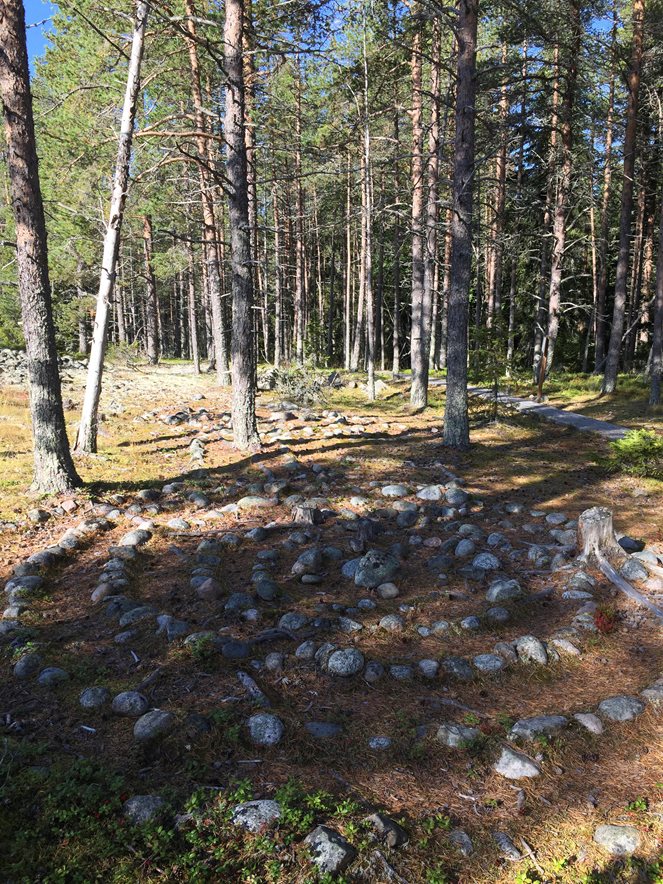 Net drying racks, poles where fishing nets used to be hung to dry. Old nets were made of linen and had to dry daily to prevent rotting. Remains of net drying racks are considered listed monuments and must not be damaged.

Former beaches where polished, rounded rocks have been flooded by the sea, removing all soil and humus. Due to land uplift they are now found far away from the coast, some even on mountainsides.

Rock labyrinths are common throughout the Bothnian archipelago. They are often found on shingle slopes and thus well preserved. You can’t get lost in these labyrinths. There’s only one way, winding lap after lap until you reach the centre and then go back out the same way. The people living here used to walk the labyrinths to enhance fishing luck and favourable winds. Sometimes children were assigned the task of walking the labyrinths whilst the men prepared the nets for fishing. There are more than 300 labyrinths in Sweden. A third of these are found in the Bothnian archipelago and they are particularly common in the Haparanda archipelago. Many were built in the 18th and 19th centuries but the oldest are from the 14th century. Labyrinths are considered listed monuments and must not be damaged.

The land keeps rising by about 9 mm per year and there are traces of the last inland ice sheet everywhere. Rock faces on islands and mountain peaks were polished by the ice. The ground is often covered in moraine, left behind by the ice. Sometimes, the moraine is shaped in elongated hills following the direction of the receding ice, so called dumlines. Sometimes these were shaped on the edge of the ice and those are called terminal moraines. Ridges, deltas and clay soils were also created by the ice.

Foundation stones in the ground, remains of a simple, ancient dwelling, probably a temporary one.