The sea and the fishery are always in focus for a fishing family that has lived on Junkön for centuries. They know and love everything about the ever-changing ways of nature and the sea. The bountiful island attracts many visitors, both tour-boaters and leisure craft enthusiasts.

The scent of freshly smoked fish is carried on a warm summer breeze. Visitors who have just arrived at Junkön's harbour, next to the red fishing huts that house both a museum and a summer café, are welcomed by the seductive aroma.

"It gives us an old-time feeling when the boat tourists greet us as we sit cleaning fresh-caught fish. They buy freshly smoked whitefish and chat for a while,” says Lars Ökvist.

He and his cousin, Per Ökvist, are the Junkön fishermen. They grew up as neighbours and playmates, with the ever-present sea and the fishery. The boys' fathers were brothers, who learned the craft from their fathers, just as generations had done before them. For the cousins, taking over from their fathers was self-evident.

Lars and Per are the eleventh generation of Junkön fishermen to have lived and worked in the same place. Most of the island's 12 residents belong to the family.

"My forefathers built our Norrbotten farmstead after moving here in the1700s. 1787, the year the house was built, is carved on the ridge of the roof," explains Lars.

The beautiful old farmhouse stands high up from the shore, overlooking Junkön's harbour and the sea. From the farm, the family has witnessed the shifting seasons and nature's changes.

Currents, wind and ice. Storms, rough seas and hard times. Living and working in nature has its challenges – and its charms. A trip to town can be a car ride or a snowmobile ride on ice roads, a boat trip on calm waters, or a wet and windy jet-ski adventure.

23-year-old Felicia Thurfjell learned early how to handle a boat, snowmobile and tractor, and when she was in high school she rode a jet-ski all the way from the island into town.

"Sometimes the waves were huge and I became one with the sea. I learned a lot. Whenever I'm uncertain if the ice road is safe or the sea is navigable, I ask Lars. He knows everything you need to know and I ask him and learn," says Felicia, who usually accompanies Lars during the winter to test the ice to see if it is safe.

Felicia moved to the island when she was eight, together with her mother, Ulrika, who had helped with the löjrom at the farmstead and fallen in love with the fisherman. 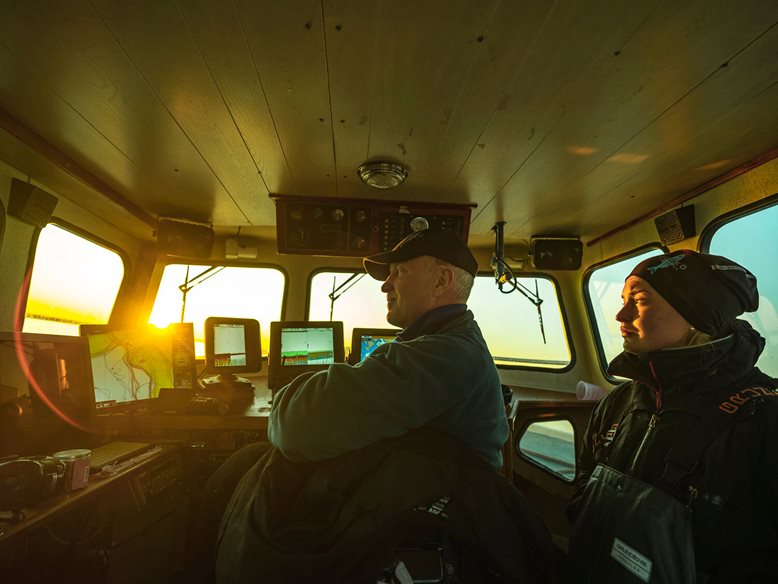 "For me, moving to the island was a wonderful adventure. I love animals. Here, there were both cats and dogs, and I was able to keep my horses on the farm," says Felicia, who can't image a life that isn't close to the sea, the forest, nature and animals.

The horses, Lukas and Zogge, graze in the paddock next to the woodland road, and Felicia tells us there are some great riding trails on the island. Right now, however, she is fully occupied with the family business. During summer everyone has just one day off each week.

During the peak season there are fish to be caught: salmon, whitefish, sea trout and Baltic herring, all of which must be cleaned, filleted and processed. Three times a week, Lars, Ulrika and Felicia take turns with Per and his family travelling into town with the fishing boat.

When they sell fresh and smoked fish in Luleå's north harbour, customers gather in a long queue along the theatre quay.

"Meeting all of the happy customers is the fun part of the job. People often show their appreciation," says Felicia.

Autumn is the season to fish and process European cisco, or vendace. The much-prized roe, löjrom, is squeezed from the fish and prepared before being packaged and delivered to wholesalers, shops and gourmet restaurants in Stockholm and Luleå.

"We've been visited by Sweden's national gastronomy team and restaurateurs who have wanted to learn more about how löjrom gets from the sea to the table. They've had the opportunity to join us when we've gone fishing for the delicacy," explains Felicia.

Both she and Per's teenage son, Noa, work in the family business and have their sights set on taking over as the twelfth generation on Junkön.

For the time being, Felicia works as an accounting assistant in Luleå a couple of days a week, but her goal is to make her living entirely in the archipelago.

"I have quite a few ideas about how we could develop tourism on Junkön and I hope to be able realize some of them. The archipelago has so much to offer."