The northern lights, Aurora Borealis, shrouded in magic and mystery, are the visible reaction of particles from the sun colliding with parts of the outer atmosphere, following the whims of the solar winds. The sparkling light experience in green, blue and sometimes even red, then sweeps over the dark night sky.

The Latin name for the northern lights is Aurora Borealis which roughly translates to the light at the break of dawn. And it is easy to understand why the name came to be when you see the light dance across the dark night sky. Historically, the northern lights were believed to be a sign from the gods or bad omens.

Aurora Borealis can be seen from large parts of Europe, but it's most common and the strongest in the north, close to the arctic circle. In Nordic mythology the northern lights were believed to be a sign from the allfather Odin. Always in preparation for the big fight against Ragnarök, Odin would choose the bravest warriors from earth to join his side. When the Valkyries led the chosen men across the sky the light reflecting off their armor could be seen from the earth as northern lights. Others believed the light phenomenon to be the last breath of fallen men or the shimmering rainbow-bridge Bifrost, which led warriors to Valhalla.

For the Sámi people the northern lights weren't about bravery or valiant warriors. It was something to be respected and even feared. They thought the lights was the souls of dead people and nothing to be joked about. To wave, whistle or sing was considered very dangerous as the lights could hear you and take you away.

Farther south, northern lights often have a reddish tint, which explains why people often associated it with bad omens and a foreboding of bloodshed and death. But not everyone was scared by the sight of what now is known to be Aurora Borealis, or northern lights. In Denmark people thought the lights was created by swans, competing against each other to see who could fly the farthest north. And in Finland it was believed to be from a magical creatures called fire foxes. When the fire fox ran across the sky its tail swept through the snow and the snow flakes created the northern lights when they met the light from the moon.

No matter what, the northern lights have fascinated people through history, and when you see them dance across the night sky it's hard not to believe a little bit of magic is involved. 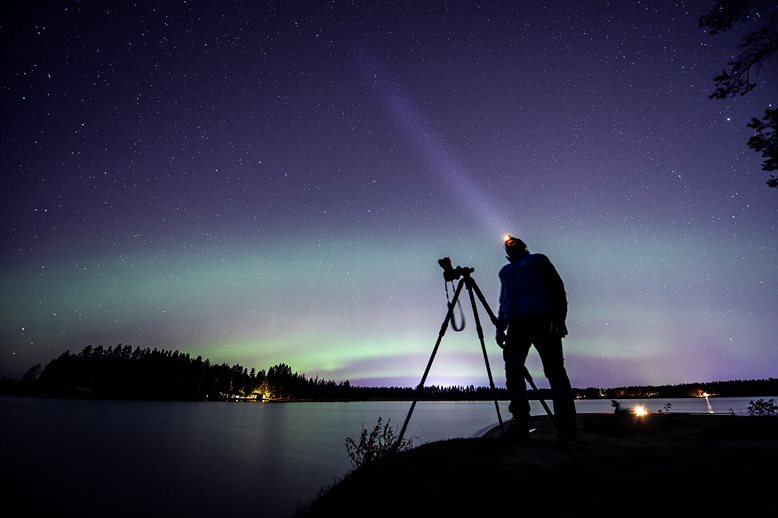 Colour of the northern lights

The colour of the northern lights depends on the height and speed at which the solar particles collide with the atmosphere.

Conditions for northern lights in Luleå

It has to be sufficient solar energy to create aurorae in the atmosphere combined with the  energy impacting the atmosphere at an angle that is suitable for our location. Clear skies or scattered clouds are required for the northern lights to be visible. You can see them dancing over the city of Luleå, but they will be shy and not as prominent. Therefore we recommend you choose an open and suitably dark place and avoid well-lit places to any extent possible.

There is no ‘timetable’. Northern lights may occur at any point during the hours of darkness and vary in duration. Northern lights are visible in Luleå from late August until the first days of April. During the rest of the year, the skies are too bright for the phenomenon to be visible.

For northern lights forecasts, visit: www.aurora-service.eu/aurora-forecast. You can also download the app Aurora Forecast, available for both iPhone and Android.